Where Will Your Retirement Money Come From

Where Will Your Retirement Money Come From?

Tip: Retiring Older.
During the past year, one survey found 13% of workers now plan to retire later than they previously expected.
Source: Employee Benefit Research Institute, 2015

For many people, retirement income may come from a variety of sources. Here’s a quick review of the six main sources:

Social Security is the government-administered retirement income program. Workers become eligible after paying Social Security taxes for 10 years. Benefits are based on each worker’s 35 highest earning years. If there are less than 35 years of earnings, non-earning years are averaged in as zero. In 2015, the average monthly benefit is estimated at $1,328.¹

One survey found that 66% of today’s workers expected that their personal savings and investments outside their IRAs and employer-sponsored retirement plans will be either a major or minor source of retirement funds. The same survey found that only 44% of current retirees report personal savings and investments are a source of funds.²

Traditional IRAs have been around since 1974. Contributions you make to a traditional IRA may be fully or partially deductible, depending on your individual circumstances. Distributions from a traditional IRA are taxed as ordinary income and, if taken before age 59½, may be subject to a 10% federal income-tax penalty. Generally, once you reach age 70½, you must begin taking required minimum distributions.

Roth IRAs were created in 1997. Roth IRA contributions cannot be made by taxpayers with high incomes. To qualify for the tax-free and penalty-free withdrawal of earnings, Roth IRA distributions must meet a five-year holding requirement and occur after age 59½. Tax-free and penalty-free withdrawal also can be taken under certain other circumstances, such as a result of the owner’s death. The original Roth IRA owner is not required to take minimum annual withdrawals.

Well over one-third of workers are eligible to participate in a defined–contribution plan such as a 401(k), 403(b), or 457 plan.³ Eligible workers can set aside a portion of their pre-tax income into an account, which then accumulates tax deferred.

Distributions from defined contribution plans are taxed as ordinary income and, if taken before age 59½, may be subject to a 10% federal income-tax penalty. Generally, once you reach age 70½, you must begin taking required minimum distributions.

Defined–benefit plans are “traditional” pensions—employer–sponsored plans under which benefits, rather than contributions, are defined. Benefits are normally based on factors such as salary history and duration of employment. The number of traditional pension plans has dropped dramatically during the past 30 years. (See chart below.)

In a recent survey, 67% of workers stated that they planned to keep working. In contrast, only 25% of retirees reported that continued employment was a major or minor source of retirement income.⁴

Expected Vs. Actual Sources of Income in Retirement

What workers anticipate in terms of retirement income sources may differ considerably from what retirees actually experience. 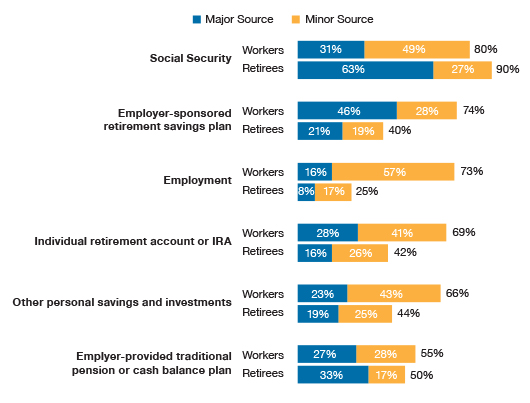 The content is developed from sources believed to be providing accurate information. The information in this material is not intended as tax or legal advice. It may not be used for the purpose of avoiding any federal tax penalties. Please consult legal or tax professionals for specific information regarding your individual situation. This material was developed and produced by FMG Suite to provide information on a topic that may be of interest. FMG, LLC, is not affiliated with the named broker-dealer, state- or SEC-registered investment advisory firm. The opinions expressed and material provided are for general information, and should not be considered a solicitation for the purchase or sale of any security. Copyright 2015 FMG Suite.